Dr. Kalpakjian is the lead researcher on two new grants that will support the creation of pregnancy decision-making tools for women with physical disabilities. 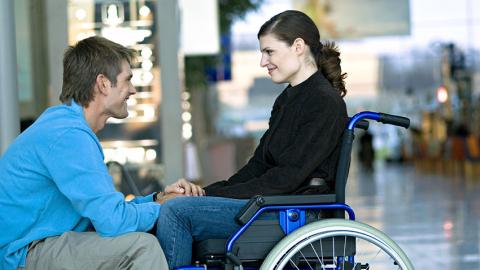 Becoming a mother is often a very personal decision for a woman.

“For a woman with a physical disability, making a decision about whether or not to get pregnant can be very complicated,” says Claire Kalpakjian, Ph.D., M.S., associate professor of physical medicine and rehabilitation at Michigan Medicine. “Health care providers are often unsure how to advise their patients and can discourage women from even thinking about it.”

Kalpakjian is the lead researcher on two new grants that will support the creation of pregnancy decision-making tools for women with physical disabilities.

Decision-making tools, sometimes called patient decision aids, can help patients facing a health decision to make a high-quality decision — a decision based on as much evidence as possible, as well as one that matches his/her values and preferences.

“Decision-making tools are most common in cancer to help patients make high-quality decisions about treatments,” Kalpakjian says. “Now we are seeing more and more of these in other fields of medicine. While pregnancy is not a disease or something that needs a ‘treatment,’ it is a big decision and sometimes can be very complicated for women with physical disabilities.”

Kalpakjian explains that even though there are thousands of women with physical disabilities, such as a spinal cord injury, cerebral palsy or multiple sclerosis, who become pregnant each year, they still deal with stigma.

“Unfortunately there is still a stigma that women with disabilities don’t have sex, don’t get pregnant and/or don’t want to be a parent,” she says. “The ultimate goal of these grants is to empower women in their pregnancy decision.”

Read the rest of the story at the Michigan Lab Blog