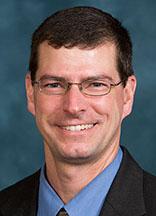 Dr. Litzenberg joined the Department of Radiation Oncology in 1997 after completing his PhD in Physics at the University of Michigan. He completed his post-doctoral training in the department and joined the faculty in 2002. His primary research interests include FLASH radiation therapy using ultra high dose rates to reduce toxicity to healthy tissues, and the implementation and integration of new technologies. He was the first to implement and fully integrate a six degree of freedom patient-positioning system with daily image guidance for targeting moving tumors. He was an early pioneer in studying the effect of magnetic fields on radiation therapy beams, and also of real-time electromagnetic tracking of moving tumors.

Dr. Litzenberg is currently spending half his time at our new clinic in Brighton. Several features on the newest treatment machines were invented or inspired by his previous clinical research and are now being implemented into routine clinical use to improve treatment accuracy.