To develop advanced x-ray imagers, based on pixel circuits employing poly-Si thin-film transistors (TFTs), capable of recording the energy of individual x-ray photons.  Through measurement of the spectral information of x-ray photons, photon counting imagers offer the possibility of improved image contrast and/or decreased radiation dose to the patient.  The goal is to develop large area photon counting backplanes that will significantly enhance the information content obtained from CBCT imaging for breast CT (BCT) and from kilovoltage CBCT imaging for radiation therapy (kV-CBCT).

As illustrated in the adjacent drawing, a conventional energy integrating detector accumulates x-ray signal over the duration of a radiation exposure in order to produce an image.  However, in the case of active matrix, flat-panel imagers, the imaging signal is accompanied by various forms of noise that limit performance.  By comparison, the complex circuitry of a photon counting detector can reduce or eliminate the impact of those noise sources while allowing measurement of individual x-ray signals, comparing those signals to one or more thresholds, and recording those signals which fall within a selected range – as illustrated in the accompanying drawing.  Since present-day photon counting detector technologies offer limited detection area, our research is focused on development of photon counting detectors based on large-area, monolithic poly-Si semiconductor backplanes. 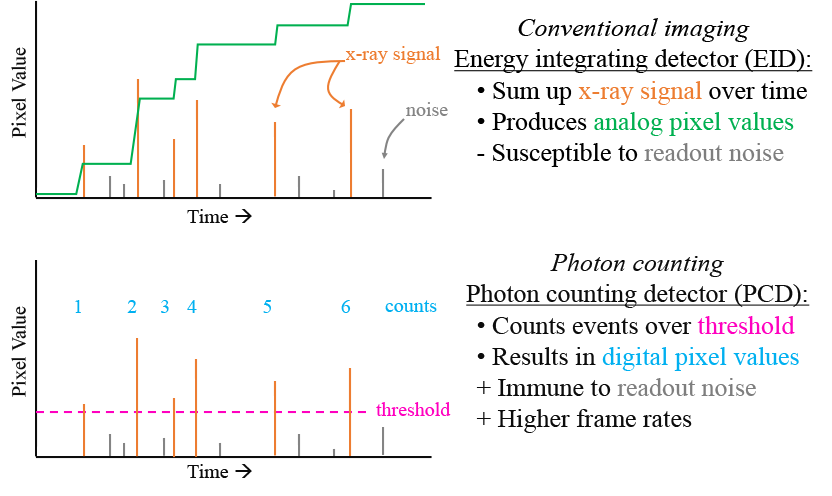 Large-area photon counting backplanes would allow the acquisition of CBCT image sets with improved quality and significantly reduced dose.  This would allow BCT (which offers advantages for diagnosing breast cancer) to be performed as a screening procedure instead of a diagnostic procedure. This would also improve kV-CBCT imaging (which offers superior soft-tissue contrast compared to portal imaging with the megavoltage treatment beam) to improve the geometric precision of radiation therapy.

Increasingly sophisticated circuit simulation frameworks have been created in order to evaluate various photon counting poly-Si circuit designs. These frameworks simulate signal and noise characteristics of circuits consisting of the essential components of a photon counting pixel (amplifier, comparator, clock generator and counter – as illustrated in the adjacent drawing) in order to estimate the count rate capabilities, energy resolution and reliability of such complex pixel circuits.  Our group has used such frameworks to guide the design and fabrication of an initial set of prototype arrays – shown in the accompanying pictures. 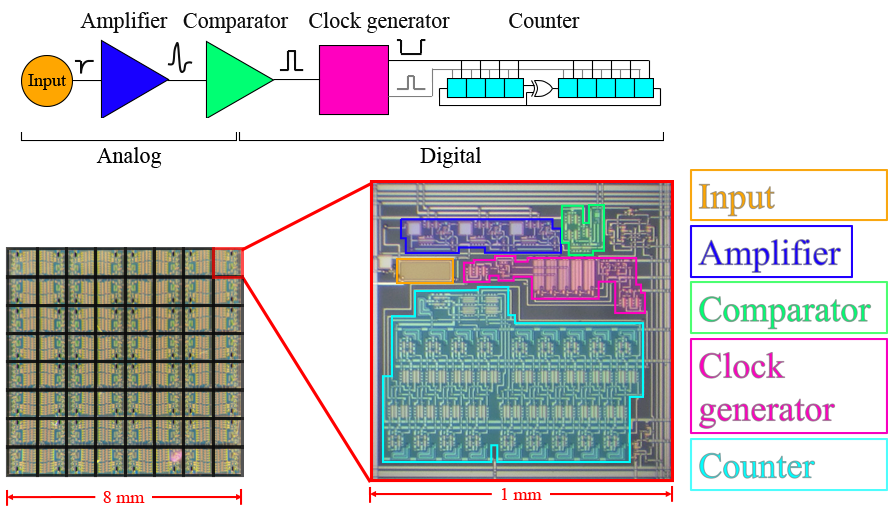 This research has been funded by the National Institutes of Health / NIBIB as well as by our department.