Building on her work on mental health stigma in the medical profession, Dr. Katherine Gold has published a new study on state medical licensing boards' evaluation of mental health among physicians. 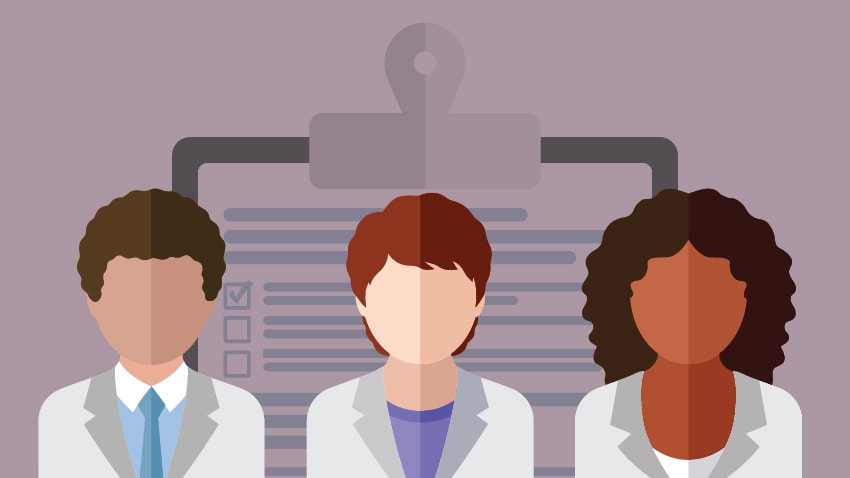 Sharing a history of mental health issues with an employer is difficult for anyone.

It’s that much harder if reporting an old or well-controlled condition could lead to restrictions on your professional license — as some physicians well know.

A new study found state medical boards ask physicians much more extensive and intrusive questions about mental health conditions than for physical health conditions. Despite national concern about physician suicide and well-being, research shows that even if physicians struggle with depression, they are reluctant to disclose and seek treatment because it could have serious consequences when they apply for their medical license.

What she found is cause for alarm.

“The differences were really quite striking,” says Gold. “States were significantly more likely to ask if physicians had been diagnosed, treated or hospitalized for mental health or substance abuse verses for physical health disorders, often asking about many years in the past.”

Many of the questions violated the Americans with Disabilities Act as well, the study finds.

“The problem is that states don’t ask, ‘Do you have a problem right now that affects your ability to provide good care for patients?’” Gold explains. “(Instead) they ask broad questions that intrude on physician privacy and prevent doctors from seeking care, but don’t necessarily pick up on impaired physicians.”

A similar number of states asked about both physical and mental health, but the content and nature of the questions varied. Physical health questions tended to be much more lenient and vague while questions about mental health and substance abuse were much more specific, and at times, even intrusive, Gold says.

Last year Gold led a survey that asked 2,100 female physicians who were also mothers about their mental health history and treatment.

Nearly half said they believed they met the definition for a mental illness at some point in their career, but had not sought treatment. Two-thirds reported that fear of stigma, including fear of reporting to state medical boards, drove them to keep their worries quiet.

Only 6 percent who had ever been diagnosed had reported it to their state licensing board, as most felt their condition didn’t affect the care they gave.

“I actually had a physician email me a month ago, and she was really worried because she had postpartum depression several years ago,” says Gold. “[She] reported this to her state medical board and shared all of her treatment records but was still fearful that they would limit her license, despite the fact that there were no problems with her work and she was now doing much better. She was really terrified.”

How state licensing boards respond to disclosures made by physicians about their mental health cannot be predicted and varies state by state, says Gold.

“It completely depends on the board,” she says. “It could range from the board saying, ‘Just send us a letter from your doctor, to send us all of your medical records from all of your treatment, to come before the board and give us your defense as to why you are fit to practice,’ or even calling for ongoing monitoring and license restrictions.”

There is minimal data examining the impact of physician mental health on patient outcomes, Gold says. But conclusions can be drawn about how this issue affects doctors.

“Asking about prior problems or mental health diagnoses make it less safe for physicians because it creates an enormous pressure not to seek mental health treatment,” says Gold.

“It affects physician identity. If you’ve trained for all these years as a physician and then you can’t practice because back 10 years ago you had postpartum depression, that’s really threatening. A lot of people just don’t get help, and if they do get help, it’s often off the books or informal help, which is not ideal.”

A number of hospitals nationwide, including Michigan Medicine, are implementing programs to help residents and physicians individually improve their overall wellness and resilience.

Although health systems should promote healthy lifestyles for doctors, more comprehensive and system-level changes should occur as well, Gold says.

“We’re not going to improve physician health until we can take away some of the barriers to seeking help,” she says. “We know that reporting this level of detail to state licensing boards is a huge barrier for physicians because of self-stigma and fears about their license and not being able to practice.”

As a first step to make changes, Gold suggests making sure all questions about mental health on state medical licensing applications comply with the Americans with Disabilities Act. She also says questions should only ask about current conditions causing impairment. This ensures physicians aren’t punished for disclosing an issue in their past that they’ve correctly addressed.

“I think that’s where change has to come from. It has to come from the group that is advising the state medical boards,” she says. “They don’t have regulatory authority over the boards, but certainly they can recommend best practices for the states.”

Find the original press release by Lauren Love, on the MHealth Lab blog.

Explore more research on depression and primary care psychiatry from the U-M Department of Family Medicine.