A new paper in JAMA Pediatrics, led by Tammy Chang, presents youth perceptions of Juul, a popular e-cigarette product and why youth vape. 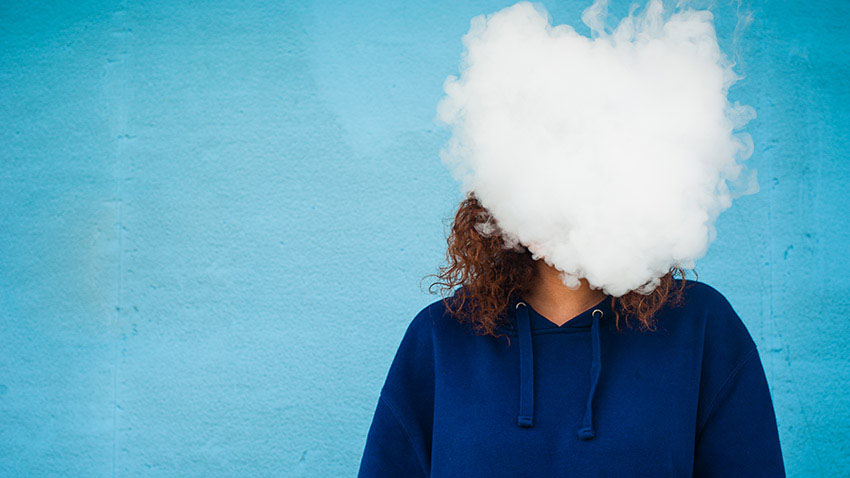 "Youth Perceptions of Juul in the United States" a research letter from a team of adolescent health researchers led by Tammy Chang, was published in JAMA Pediatrics on May 4, 2020.

They know it’s addictive. They know it’s linked to dangerous and even fatal lung diseases. And they know it delivers far more nicotine than the cigarettes it’s supposed to replace.

But the social aspects of vaping drives young people to use Juul and other e-cigarettes, according to nearly two-thirds of teens and young adults in a new study. Less than 5% say the availability of fruity flavors drives use of e-cigarettes by members of their generation, and only 10% say that addiction does.

The findings, published in a research letter in JAMA Pediatrics, come from a text-message-based survey of teens and young adults between the ages of 14 and 24 conducted by the University of Michigan’s MyVoice study.

The survey was conducted before the 2019 epidemic of vaping-associated lung injury, and long before suggestions that COVID-19 might pose a greater risk to people who smoke or vape. It was also conducted before the federal ban on sales of all vaping products to people under the age of 21, and on the sale of fruit-flavored vaping pods, but not vaping liquids. 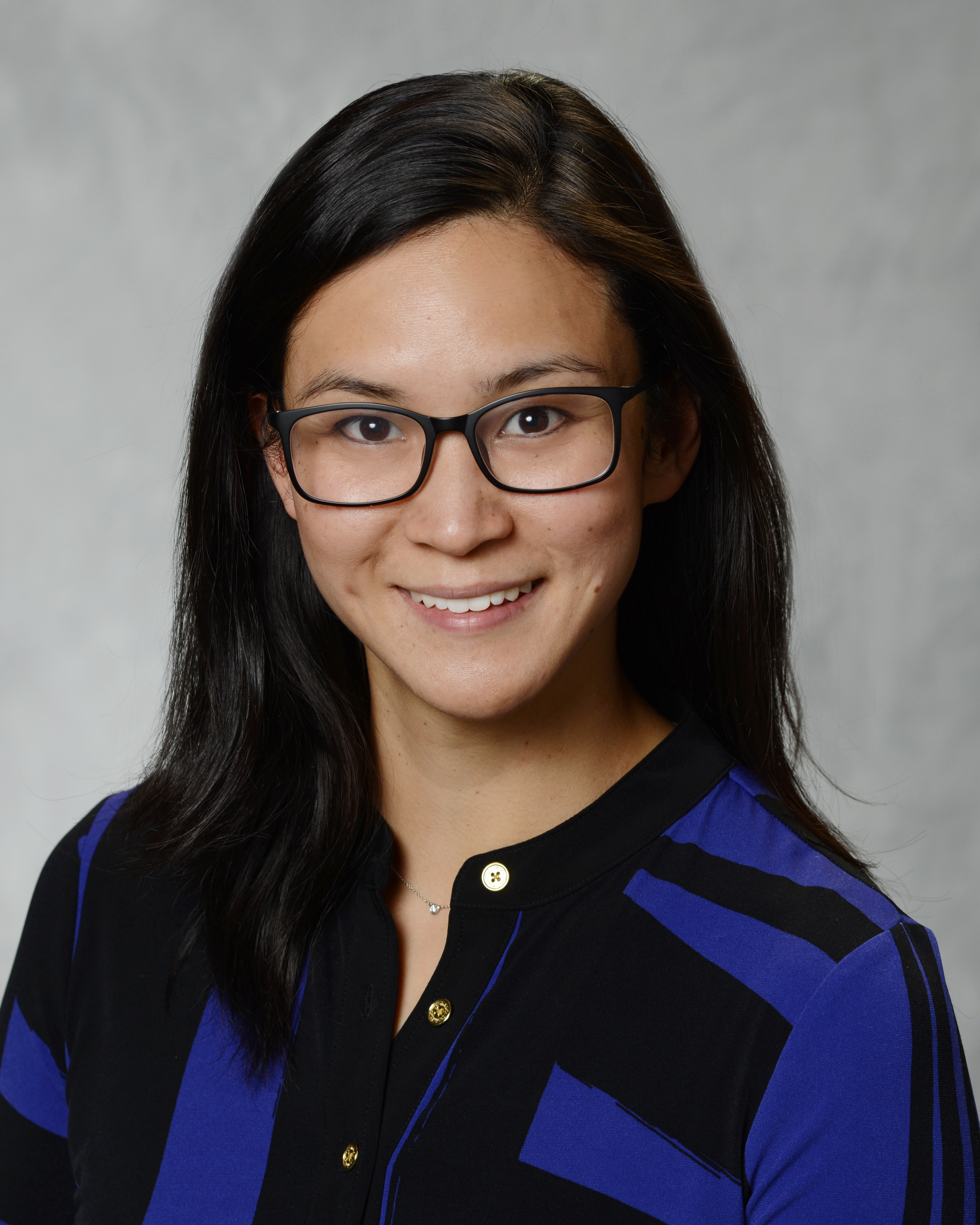 But it still sheds light on what kinds of messaging and interventions might be needed to reduce e-cigarette use in in youths, says senior author Tammy Chang, M.D., M.P.H., M.S., assistant professor and founder of MyVoice.

“It’s not just about the flavors, it’s about understanding the motivations for using these products, and their attitudes toward risk,” says Chang.

“They’re more savvy than we think they are, and they’re using it because it’s about being cool and about the experimentation that happens naturally in adolescence. Reducing teen and young adult use of these products, especially under current policies, will require an evidence-based approach.”

The survey used “juuling” as the term for the activity of using Juul and other e-cigarettes. It asked a nationally representative sample of teens and young adults four questions, and allowed them to answer however they liked. In all, 1,129 young people answered – 92% of those who have volunteered to receive occasional text surveys from the MyVoice study. 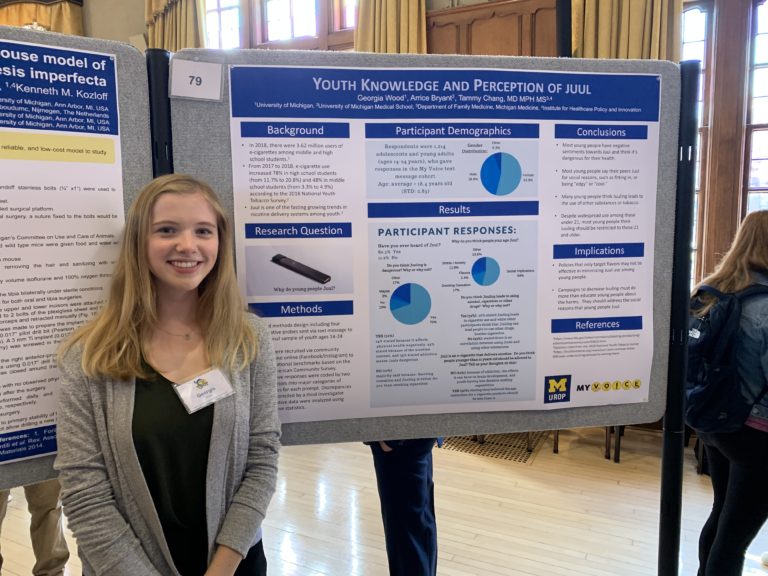 Georgia Wood, lead author and undergraduate student at the University of Michigan

Georgia Wood, the lead author and undergraduate student at U-M, said: “These findings are critically important because it describes the lived experiences of youth related to Juul, which has been missing. This is the kind of information we need to create policies and programs that work. Youth are depending on us to do that.”

“For policymakers and public health officials who want to focus prevention and cessation messages on the health risks, or who think that bans on flavors will be the answer, these data show that ship has sailed,” says Chang. “We need to use what we now know about what drives youth behavior, and put teeth behind the enforcement of sales bans as we have with alcohol.”

Chang notes that other research has shown that vaping spiked among young people in the past few years, just as smoking of cigarettes had gone down to record low levels.

“The message about the dangers of smoking tobacco was just getting through, and then vaping came along and we may now have a whole new generation addicted to nicotine,” she says.

The two age groups were about the same in their perceptions of danger from vaping, including nicotine intake, physical health effects and addiction. The same was true for their opinions about whether vaping leads to use of other substances.

Chang notes that more research needs to be done on how to help young people cut down on or stop using e-cigarettes, especially given the fact that nicotine replacement products like gums and patches aren’t approved for people under 18. In the meantime, young people can talk to health providers about whether those products are right for them.

More research is needed on the effects of bans on sales of vaping products to people under 21, and sales of flavored pods, Chang says —as well as on the effect of the COVID-19 pandemic on access to vape shops that sell the bulk liquids used in non-pod devices. So is more research on patterns of cigarette use by young people, after these changes, she adds.

Meanwhile, enforcement of those new rules will become more important, she says.

“As a society, we need to do the baseline job of cutting back on the potential supply of nicotine in all its forms to young people, while allowing adults who use vaping as a means of reducing cigarette use to continue to have access,” she says. “We need to focus on penalizing those who sell these products to people under 21, in any setting and any form, so that we can keep an addictive drug out of the hands of adolescents who are naturally seeking to experiment as part of their development.”

At the same time, vaping-related messaging to young people as early as middle school should focus on social factors, Chang says. This could include positive identity development that focuses on individual strengths instead of the need to be cool or belong to a social group that emphasizes vaping.

“We need to start our conversations with youth from this perspective – and start it early,” she says.

In addition to Wood and Chang, the study’s authors include Marika E.Waselewski, MPH, of the Department of Family Medicine; U-M Medical School Student Arrice C. Bryant, BA, and Kendrin R. Sonneville, ScD, RD of the U-M School of Public Health. The study was funded by the Michigan Institute for Clinical & Health Research, the U-M MCubed program, and the U-M Department of Family Medicine.