The study, led by Suzanna Zick, found that self-reported depressive symptoms, anxiety, and pain were reduced among breast cancer survivors who were trained in self-administered acupressure. 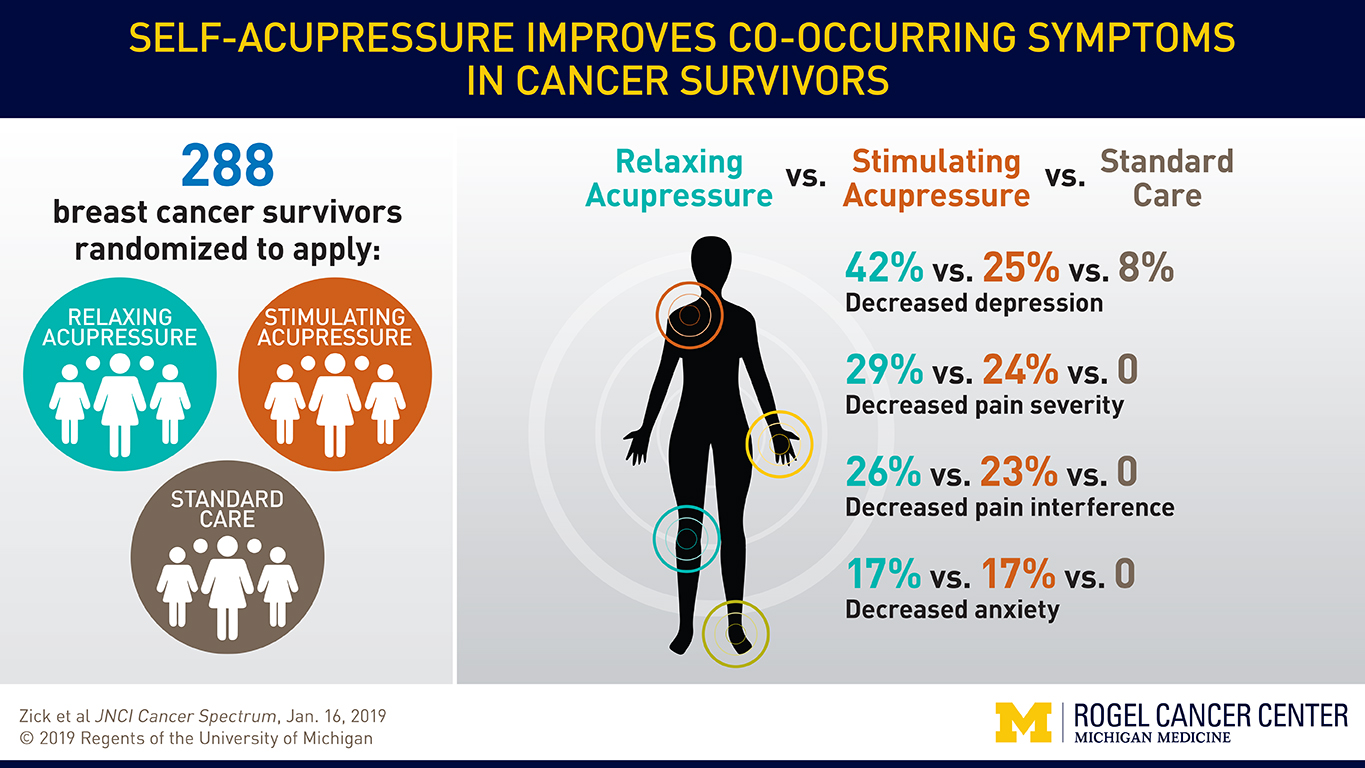 Suzanna M. Zick, N.D., M.P.H., research associate professor, and colleagues published a new study in the journal JNCI Cancer Spectrum that finds thatacupressure could be a low-cost, at-home solution to a suite of persistent side effects that linger after breast cancer treatment ends--including depression, anxiety, pain, and sleep quality.

In their new study, Zick's team looked at the impact of acupressure on symptoms that frequently accompany fatigue in this population: chronic pain, anxiety, depression and poor sleep. They found acupressure improved all of these symptoms compared with standard care.

In the study, breast cancer survivors who reported fatigue were randomized to one of two types of acupressure or to usual care, which included typical sleep-management techniques. The women were taught how to find and stimulate the acupressure points so that they could perform it at home once per day for six weeks.

Of the 424 survivors experiencing fatigue from the original study, researchers found half had at least one other symptom and 17 percent experienced all of them.

“It was actually unusual for a woman to have just fatigue. These long-term side effects are a big problem. For some women, they are significant barriers in their life,” says Zick.

The new analysis focused on the 288 patients who reported symptoms in addition to fatigue. They were asked weekly about fatigue, sleep quality, depressive symptoms, anxiety and pain. Results are published in JNCI Cancer Spectrum.

“If you have a person who is fatigued and depressed, it would be the obvious conclusion to use relaxing acupressure. For anxiety or pain, either approach might work,” Zick says.

The researchers also assessed whether improving one symptom helped improve other symptoms. They found that improving symptoms of depression improved sleep quality, accounting for about 20 percent of the improvement in fatigue.

“That means we don’t know 80 percent of what’s impacting fatigue. Depressive symptoms and sleep quality are a small part, and it makes sense. But clearly, there are other factors,” Zick says.

She suspects these symptoms impact several different mechanistic pathways, possibly impacting the brain in multiple ways. This means treatments will likely need to be tailored and varied based on a woman’s symptoms and other factors.

The researchers plan to gather more information using neuroimaging to understand the brain pathways involved. They’re also currently conducting two clinical trials to look at using an acupressure app. Working with U-M College of Engineering experts, they developed a special wand to assist patients in performing acupressure. The wand helps ensure appropriate pressure and tracks how long patients use it.

Acupressure is an appealing option because it can be done at home with minimal negative effects. The study showed that women could learn to apply correct pressure to the appropriate points. Some women reported minor bruising at the acupressure sites.

Browse the latest research on Integrative & Complementary Medicine or Cancer Prevention and Screenings from the department of family medicine.
Research