When Emotions and Decisions Collide: Investigating the Role of Emotional Response in Breast Cancer Treatment

How is a provider's decision-making affected by a patient's strong emotional response to a diagnosis? 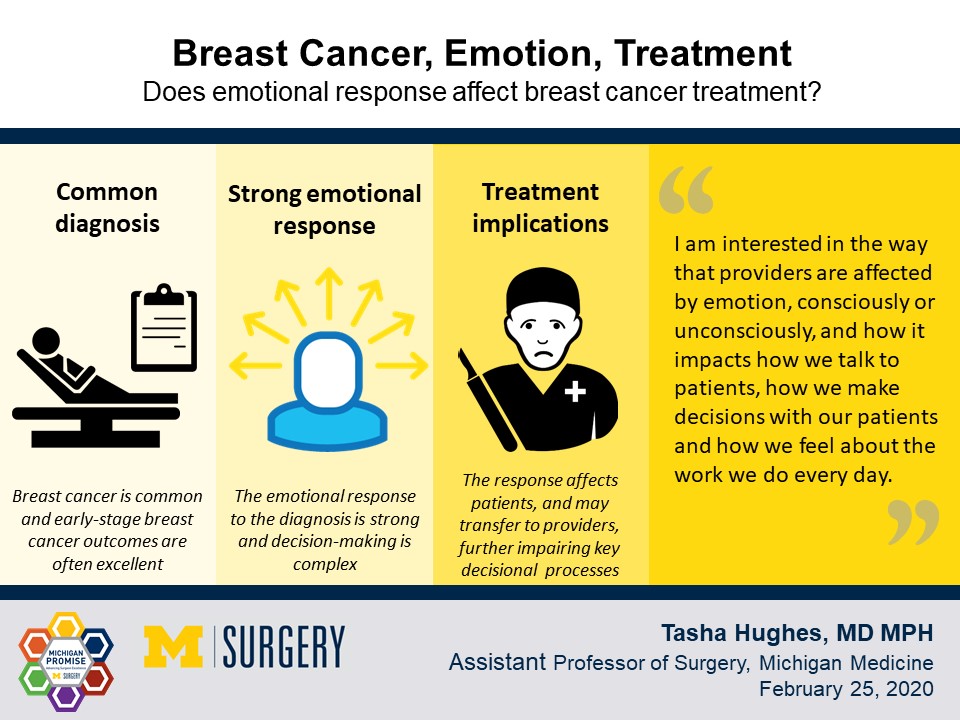 The risks of making decisions while impaired are well documented. Drugs, alcohol, and even lack of sleep all impair judgment.

What about emotional impairment? There isn't a roadside test for it, but Dr. Tasha Hughes, assistant professor of surgery at Michigan Medicine, is focused on the way emotion impacts surgeons’ decision-making, specifically with patients diagnosed with breast cancer.

“I am interested in the way that providers change consciously or unconsciously how we deliver care to patients, how we talk about choices with patients and how these might depend on the behavior they demonstrate during our encounter,” Hughes said.

In the case of breast cancer, what those patients are showing their provider is a heightened emotional state.

Hughes has long had an interest in cognitive bias and has published on it in the space of treating cancer in obese patients.

Emotion as a driver of clinical decision-making hit her radar during anthropological work she did observing tumor boards. The boards bring together health care providers from various specialties to discuss cancer cases and share knowledge and best practices. Hughes observed boards discussing all kinds of cancers.

“What stood out to me about the breast cancer board compared to other boards—liver, sarcoma, pancreas—was that we tend to really cluster around some issues of anxiety and emotion, even going so far as to refer to patients as hysterical, which has an old, gendered feel to it,” Hughes said.

Now that she’s practicing and seeing a lot of breast cancer patients, she’s experiencing that emotion firsthand. Patients seem to react more strongly to a breast cancer diagnosis, no matter the stage, than to other malignancies, Hughes said.

“I can't emphasize enough how frequently this comes up and how strongly this resonates with providers. People will comment on the amount of emotional heaviness that associates with breast cancer that is different, it seems, from other cancers.”

The reason for the seemingly heightened emotional response to a breast cancer diagnosis is not understood, but Hughes suspects culture, community, advocacy, and media are contributing factors.

Breast cancer has prominent advocacy groups associated with it, and as a result gets a lot of media attention. Hughes points out that the important work those groups are doing, which is amplified in media, comes with an unintended side effect:

“It’s bringing breast cancer and its associated fear and anxiety to the forefront, which is unique to breast cancer compared to other cancers.”

On a personal level, breast cancer is relatively common, which “Creates this phenomenon where everyone has a someone,” Hughes said.

Compounding that, most women seem to have a “cauldron story,” a tale of someone they know or someone else knew who had a negative outcome. It’s natural to focus on the negative, scary stories, “Despite the fact that the data will tell you that people do really well from a survival standpoint much of the time following a breast cancer diagnosis,” Hughes said.

Whatever the reason for the emotional response to a breast cancer diagnosis, Hughes is concerned that it is contagious and clouds decision making for the patient and the provider. This emotional feedback loop may be perpetuating a cycle of low-value care, Hughes hypothesizes.

A patient may want more extreme interventions or treatment than a diagnosis requires. A physician may provide or even recommend that excessive care, because they’re bearing some of the patient’s emotional load, or because they may not feel supported in recommending against care that isn’t guideline-concordant.

In the context of breast cancer, low-value care often refers to “over-treatment” of the cancer, usually when it’s at a very early stage requiring simpler intervention like a lumpectomy. The Choosing Wisely Campaign, a shared decision-making campaign that has asked professional societies to share opportunities to reduce low-value care utilization in breast cancer, has marked certain treatments for scrutiny among providers and patients.

One common over-treatment, flagged among other surgical procedures, is a bilateral mastectomy for unilateral breast cancer. Hughes points out that there’s sometimes a tendency for people diagnosed with cancer in one breast to want to remove any chance of it occurring in the other breast, even though breast cancer does not jump from one breast to the other.

With more surgery comes more recovery, more cost, and more risk of surgery-related complications, so it is often in the best interest of the patient and the health care system to avoid such over-treatment, Hughes said.

Support needed on both ends of the relationship

Surgeons can’t necessarily affect environmental factors that may be driving the emotional response to breast cancer diagnoses, but they can try to modulate the response on both ends of the patient-provider relationship.

For patients, it might be psychological counseling to help them process their diagnosis and be prepared to discuss the treatment journey with their physician without the cloud of emotional distress hanging overhead.

For providers, it might be more institutional support for making appropriate care recommendations. It’s not easy to tell a patient in an emotionally heightened state that the surgery they think will help them avoid a worse fate isn’t necessary. Knowing they’ll have backup for those decisions in the event of pushback may give providers more confidence in making appropriate decisions—and ultimately, providing better care, Hughes said.

Those conversations would be even more effective if providers had tools to guide them through those tough conversations, like training in supportive language. “We don’t really get trained in a standard way to talk to patients who are emotional,” Hughes said.

“There's this sense of emergency and in fact early stage breast cancer just like early thyroid cancer and others, is not an emergency. We actually have enough time to have patients have the proper psychosocial support that they need to come to a place where they make a decision that is better,” Hughes said.

From hypothesis to study

Hughes is working on a hypothesis informed by experience.

Some of the data will need to be generated. Some of it already exists through ongoing studies at Michigan Medicine. With the support of collaborators across centers and institutes at the University of Michigan, Dr. Hughes is putting together an application for funding to better understand distress and its impact on patients, providers and the decision-making process for breast cancer.

Interested in learning more about the research or collaborating? Reach out to Dr. Hughes. 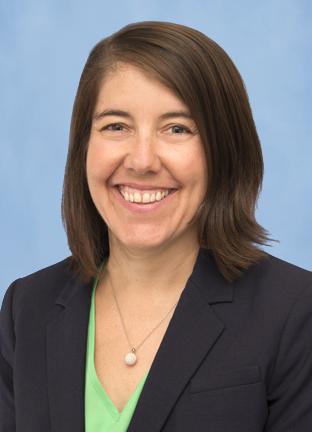