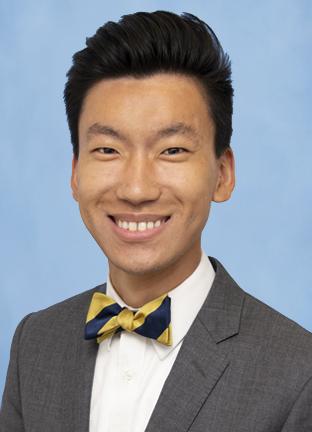 Steven is originally from Hoboken, New Jersey. He completed his undergraduate degree at Boston University majoring in Neurobiology and minoring in Human Physiology, graduating summa cum laude. During his time on the club volleyball team, he helped lead his team to a championship in the New England Collegiate Volleyball League (NECVL) and at the 2015-2016 National Collegiate Volleyball Federation (NCVF) National Championships. He received the NCVF 1st team All-American and NECVL Most Valuable Player awards. Steven obtained his M.D. at Rutgers Robert Wood Johnson Medical and was inducted into the Alpha Omega Alpha (AOA) and Gold Humanism Honor Society (GHHS) prior to graduation.
During surgical residency, Steven continues to pursue his interests in education and mentorship. He was awarded the Bronze Beeper and Coran Junior Resident teaching awards, nominated by the University of Michigan medical students. He continued to mentor students interesting in pursuing general surgery and took part in the LEAGUES Fellowship leadership team (Leadership Exposure for the Advancement of Gender and Underrepresented Minority Equity in Surgery). Steven is interested in researching LGBTQ+ medical students’ experiences applying into general surgery, LGBTQ+ surgical residency well-being, and endocrine surgery.

Outside of the hospital, I enjoy playing volleyball and pickleball. I have signed up for as many indoor, grass, and sand volleyball leagues/tournaments my schedule can handle! I am also a huge fan of National Parks. Any time I have vacation, I'll try my best to visit a different National Park, hike, and do some landscape photography. I enjoy visiting the farmers market, trying new restaurants, and exploring coffee shops in Ann Arbor/Detroit.

Why did you choose to train at Michigan Medicine?

I chose to train at Michigan Surgery because of its emphasis on resident education, wellness, and culture. Talking with the attendings and residents here during interview season, I felt that my personal and research interests would be welcomed and supported at this institution. This program values its residents, their opinions, and the diversity each member brings.