When the fight is overwhelming, it helps to leverage military mindsets. 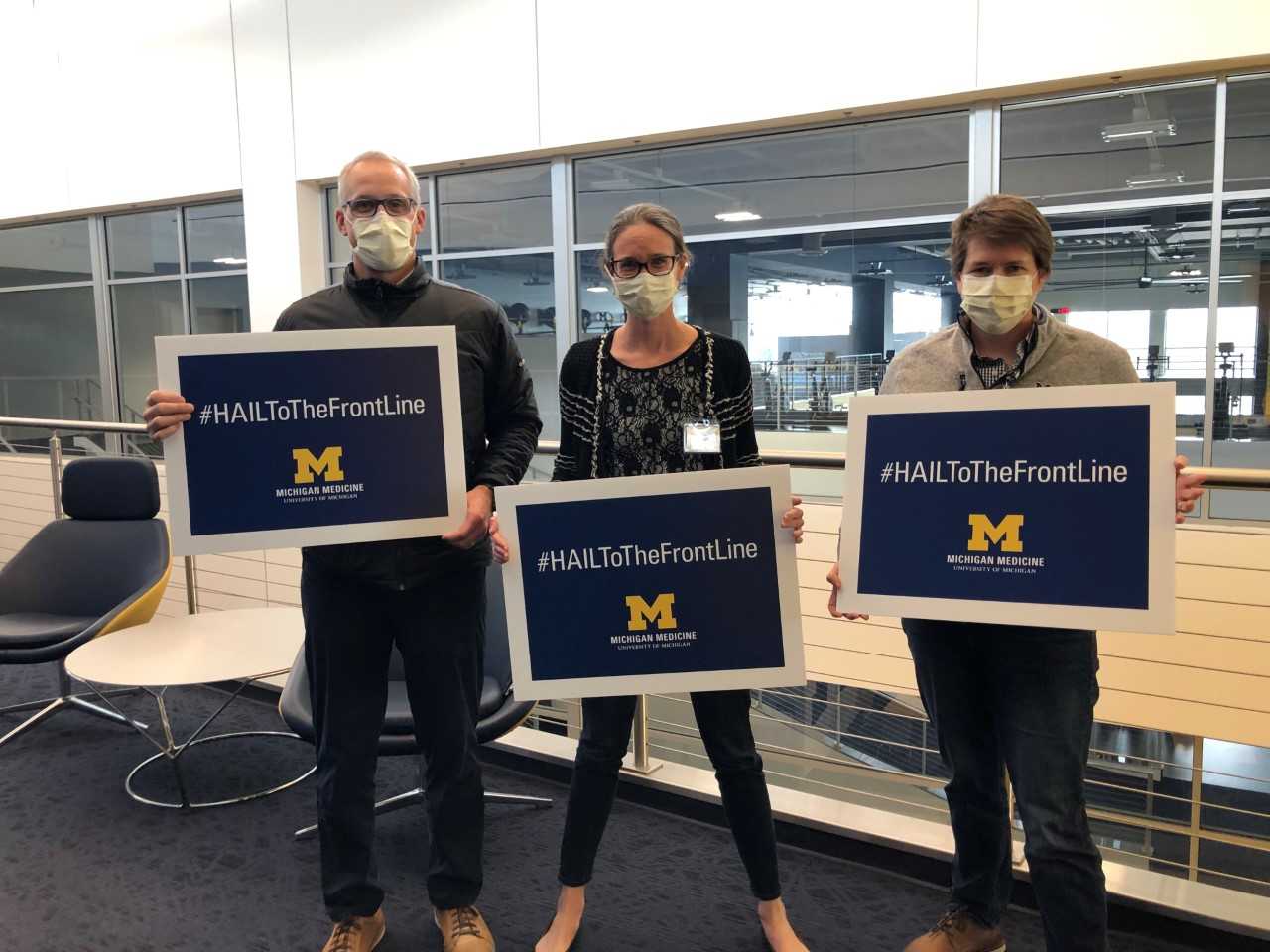 The COVID-19 pandemic has been talked about in terms that invoke war: A battle with an invisible enemy, deployment to the front lines, infectious hot zones.

It was fitting, then, that when it seemed hospitalized cases might outstrip the 1,000 bed capacity of the main hospital at Michigan Medicine this spring, military expertise was tapped.

A daunting pandemic and a monumental ask

By late March, Michigan was officially a hot spot for COVID-19. Michigan Medicine was taking patient transfers from overwhelmed Detroit-area hospitals as well as local patients, treating the sickest of the sick.

A 32-bed Regional Infectious Containment Unit (RICU) at the main hospital was set up and quickly filled. Other hospital units converted to intensive care units were also filling, while operating rooms sat largely idle as elective surgeries were delayed to accommodate the surge. With models projecting the cases to continue apace, hospital leadership decided to plan for an off-site field hospital.

Coleman got an email about it, which made clear she was involved. It wasn’t quite clear how, but when she saw Eliason’s name on it as well, she knew she was in.

“If Jon gets invited to do something and I can tag along, I will always say yes,” Coleman said.

Keith Dickey, chief strategy officer for Michigan Medicine, had tapped them, along with others, to deliver on a big ask: Find a site and plan for a facility that could accommodate 500-1,500 people—and be ready to go in less than two weeks.

The enormity of the task reminded Dossett, who was pulled into the process to head up the clinical operations, of a moment from one of her deployments in the U.S. Navy.

A commanding officer addressed her crew on an aircraft carrier and said, “I’m convinced that if I told this crew to build me a Mini Cooper and then went to bed, I would wake up to a Mini Cooper sitting on the flight deck.”

Dossett believed him, and she believed the group could deliver on the field hospital. 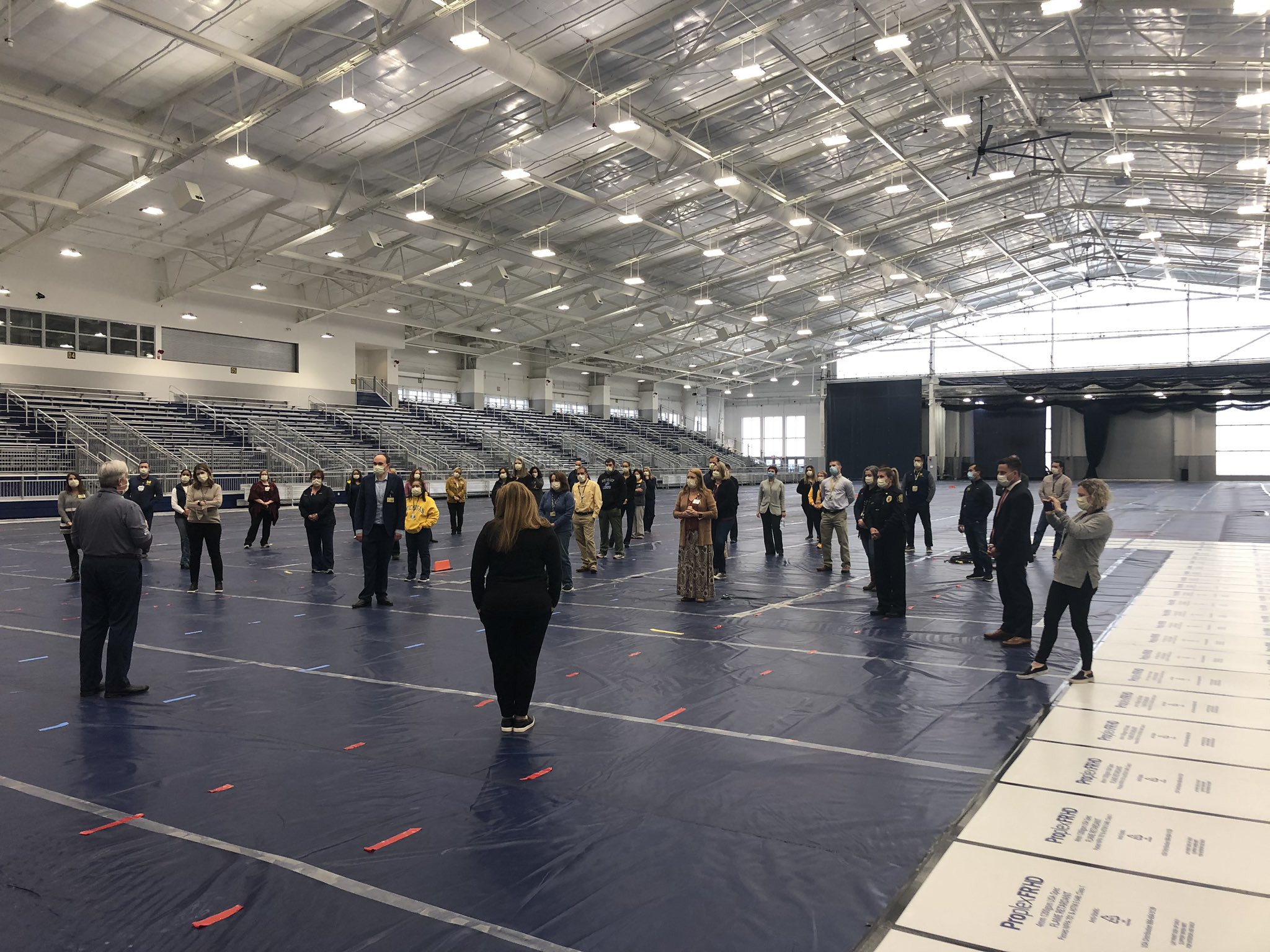 Members of the leadership team discuss the field hospital at the site last spring.

The field hospital was meant to be a “step-down unit,” a place to care for COVID patients who were no longer in need of intensive care, but too sick to go home or to a rehabilitation facility.

The first step was selecting a site, a task that involved many considerations.

Having worked in field hospitals in the military, Coleman and Eliason understood that a high patient-to-provider ratio meant visibility was critical. That ruled out U-M’s dormitories, favored initially because they had single-unit rooms, convenient bathrooms, and were close to the hospital.

“There were real barriers to using dorms when recognizing staffing limitations, visibility, and security for all of the patients that you’d have in a central location—especially acknowledging how frail some of these patients were going to be,” Coleman said.

The U-M indoor track facility at the south athletic complex was ultimately the site selected. It met the requirements for visibility, cooling (hundreds of patients running fevers would be poorly suited to buildings without adequate climate control) and access. It was also a negative-pressure environment, ideal for caring for patients with such an infectious disease.

It would be austere compared to the main hospital. Compared to a tent hospital Eliason had operated from in Iraq, with mice occasionally underfoot, it would be luxurious.

Marching forward, carefully, toward the uncertain

Eliason learned during his deployment to Iraq in 2006 that hierarchies flatten in a crisis and the mission dictates the duties.

“One of the things about the military that’s unique is that whatever the mission is becomes primary. You flip-flop roles based on the mission and whoever you designate as in charge,” Eliason said.

Another reminder from his military service was the inevitable intensity of work.

For Coleman, who was deployed twice to support the forward surgical care of combat causalities in Iraq and then Kuwait, the intensity of the job and the tight timeline meant efficiency recalled the decisiveness necessary when on a military mission. The implied trust in the leadership team and support helped make quick work possible.

“Up front, it felt like a lot, and you gear up mentally to lead in a way that is reminiscent of the leadership that we see modeled, but perhaps even more efficient. We were empowered to work collectively to just fit this mission.” Coleman said.

The Federal Emergency Management Agency and Army Corps of Engineers were engaged with the site assessment; the latter would help with the physical buildout—laying out cots, assembling barriers and doing other related construction the site required.

Not knowing exactly what was coming made having a flexible mindset important.

How quickly would the curve flatten? How many patients would need to be admitted daily?  The only certainty was that things were bad, and getting worse in terms of cases.

Dossett said her military service also helped her frame the situation. She was an active duty Staff Surgeon and completed two deployments, one on the aircraft carrier USS Abraham Lincoln and one with 1st Marine Logistic Group Shock Trauma Platoon in Afghanistan. Adaptability was a tool as essential as a scalpel.

“I think it provides a tremendous amount of perspective on what’s hard, what is a want, what is a need, what you can practice with, and what you can’t,” Dossett said.

The team had to strike a delicate balance between planning and action, between developing a process and operationalizing it. On April 9, the decision was made to delay opening the field hospital; the curve of cases had significantly flattened, and the main hospital could handle the load.

“The administration was thoughtful and strategic about marching the process forward, but not making any big capital layouts—and not being afraid when it was clear when we weren’t going to need it to say we’re standing this thing down,” Dossett said. 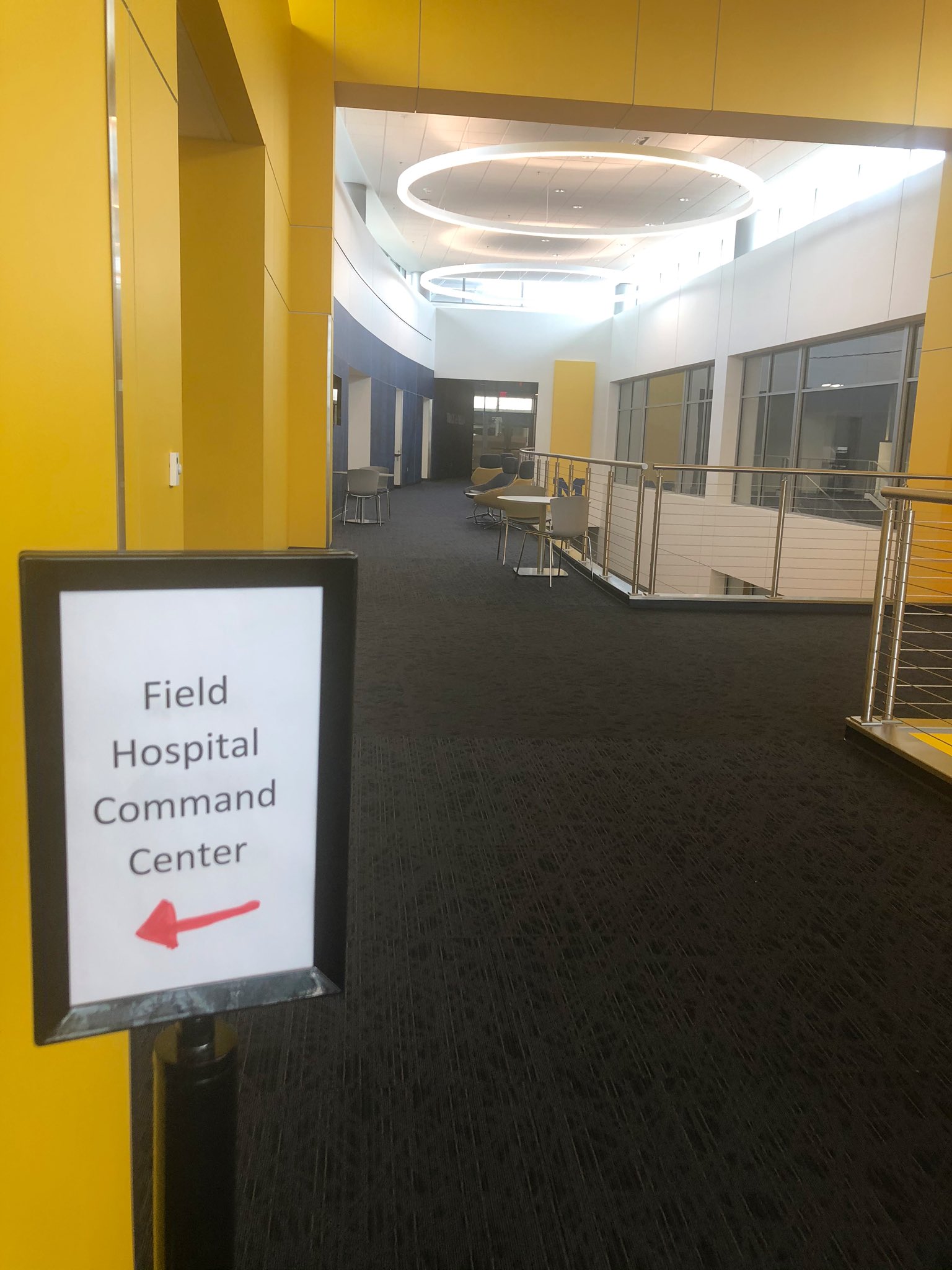 The command center for the field hospital

A crisis, a reprieve, and a benefit

Throwing time and human capital at a project that never gets off the ground could feel anticlimactic. In this case, there was tremendous relief, and a recognition that the work wasn’t a sunk cost, but an investment in how to handle a future crisis.

While Coleman and the team were prepared to provide the best possible care in less-than-ideal conditions, she was glad they didn’t have to.

“We had hard discussions going into this—discussions around palliative care and where to position a morgue, things that you get very accustomed to thinking about while deployed but certainly concepts that are less comfortable in this setting,” Coleman said.

Should the field hospital be needed, it could be set up within a couple of weeks. A working document spells out staffing models, finances and other aspects related to launching it.

Dossett said she’s learned that exercises like this are rarely a waste of time:

“That’s where the military background comes in really, and to some extent surgery. We plan for the worst case scenario all the time and most of the time, the worst case doesn’t happen.”

The best-case is what’s hoped for as the case curve starts to bulge in the wrong direction nationally, and in Michigan. If the worst happens, there’ll be a plan.