With the goal of building and maintaining the highest performing teams in academic surgery, a multifaceted approach to recruit new faculty at all ranks was implemented in the Department of Surgery at The University of Michigan. 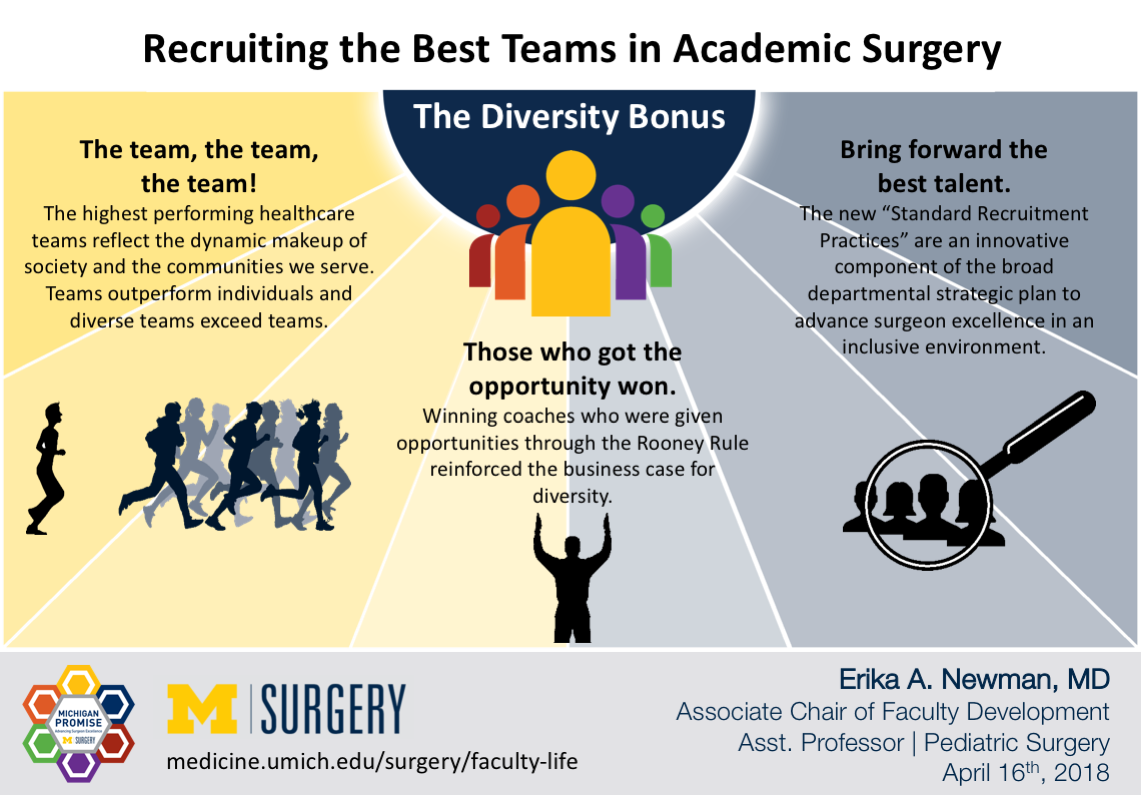 The highest performing healthcare teams reflect the dynamic makeup of society and the communities we serve. Teams outperform individuals and diverse teams exceed teams. In Scott Page’s recent book, The Diversity Bonus, we also learn that the most successful teams for solving complex problems like those encountered in healthcare delivery benefit from deep diversity and inclusion that spans abilities, background, thought, and identity. Organizations that can effectively recruit and retain such diverse workforce teams gain a competitive advantage that reaches far beyond socio-ethical implications and compliance goals. This is exemplified by studies showing that academic papers published by collaborative and diverse groups are cited more frequently and have significantly higher impact than those published by individuals or homogeneous groups. Moreover, companies that invest in diversifying teams show stronger returns. Firms studied in Standard & Poors Composite 1500 (S&P 1500) with women in top management roles correlated with a $42 million increase in firm value - a game-changing bottom line bonus.

Ensuring workforce diversity in academic medicine has become a priority for many American medical schools in fulfilling their mission and vision. This is happening rapidly in the most progressive institutions as the diversity bonus has become clearer. Departments that are able to effectively recruit and retain faculty and residents from diverse cognitive, ethnic, and gender groups will maintain the highest performing clinical, education, and research teams. In academic surgery, traditional practices involve a trusted network from which promising candidates are referred and recruited. Networks are comprised of people who are similar in experiences and identities. This has led to restricted opportunities for women and underrepresented ethnic groups to move forward and succeed in search and recruitment processes. Social stereotypes and implicit bias are barriers that also influence evaluation and selection of talented candidates at all ranks and leadership levels.

How can such barriers be systemically eliminated? Imagine a shift towards inclusive recruitment and hiring of surgeons based on accomplishments and their unique potential to increase the cognitive and identity diversity of the clinical and research teams that they will join? What bold organizational steps can we take towards creating a more open and intentional recruiting culture?

Those Who Got the Opportunity Won

In 2003, the National Football League implemented the Rooney Rule, named after Dan Rooney, then owner of the Pittsburgh Steelers charged with addressing the NFL’s problem of inclusive hiring and lack of diversity of head coaches. The rule requires teams to interview at least one ethnic minority candidate for all open head coaching jobs. The rule was created after U.S. civil rights attorneys released data showing that black head coaches were less likely to be hired and more likely to be fired than their majority peers, despite winning records. Since 2007, half of the teams who reached the Super Bowl final had a coach or general manager of color. Winning coaches who were given opportunities through the Rooney Rule exemplify the business case for diversity and incited buy-in outside of the NFL with Facebook, Amazon, Xerox and the US Pentagon adopting similar recruitment policies. The NFL has expanded the Rooney Rule to include women and executive front office positions. The Rooney Rule has had overall positive effects on the NFL though critics point out that more work needs to be done to make it as effective and sustainable as possible. For example, “sham interviews” rather than a real search for diverse and talented candidates has slowed progress, and top coordinator and team president positions are not included. 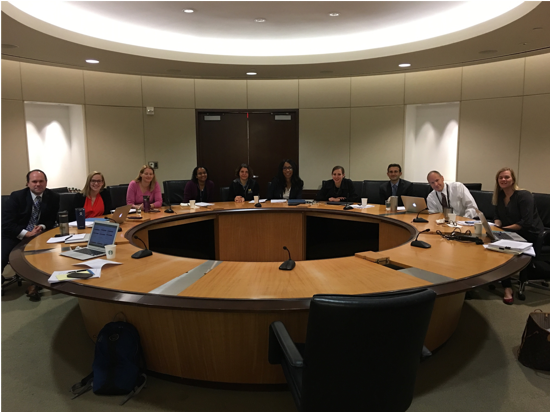 With the goal of building and maintaining the highest performing teams in academic surgery, a multifaceted approach to recruit new faculty at all ranks was implemented in the Department of Surgery at The University of Michigan. The new “Standard Recruitment Practices” were implemented in July 2017 as an innovative component of the broad departmental strategic plan to advance surgeon excellence in an inclusive environment - the Michigan Promise. Implementation of standard recruitment practices will not lower standards but will find new sources of talent that have been previously overlooked or excluded. This includes an active Departmental Recruitment Committee with 20 standing mid-level, senior faculty surgeons, and residents. Elements of oversight include standards in compiling candidate pools. Similar to the Rooney Rule, we have established the requirement that at least one woman and/or a candidate from an underrepresented racial or ethnic group is interviewed for all open faculty and leadership positions in the department. To avoid the possibility of “sham interviews”, meaningful interviews are conducted by the Departmental Recruitment Committee. The interview format utilizes relevant behavior-based questions and an objective evaluation tool. The committee provides a detailed written summary statement for each candidate in ranking order to the chair and section chief. Committee members have received implicit bias training and awareness tools. A component of the committee’s work is ensuring that candidate pool selections are composed of the most talented and diverse surgeons, and that campus visits reflect institutional and departmental values. The new recruitment process requires full assessment and establishment of best practices in order to ensure success and sustainability.

There is a special movement happening in the Department of Surgery at the University of Michigan; a complex journey poised to cultivate a culture of full inclusion and professional excellence. As we close out this first year of implementation, the road ahead is exciting! We are spreading a new way of thinking about how to grow our faculty and build the highest performing teams in academic surgery. We are broadened the net of potential by looking outside of ourselves and our traditional networks to bring forward the best talent and the next generation of winning teams! Go Blue! 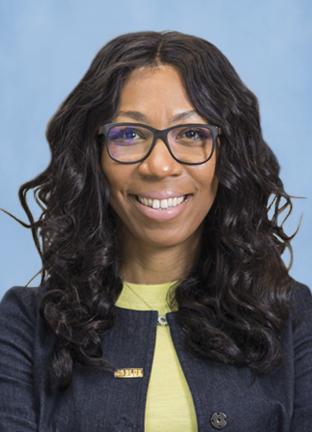