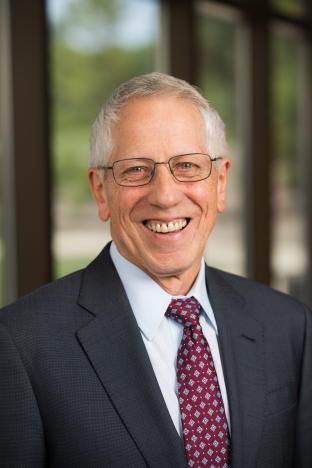 Dr. John F. Greden is the Rachel Upjohn Professor Emeritus of Psychiatry and Clinical Neurosciences in the Department of Psychiatry, Active Emeritus; Founder of the Frances and Kenneth Eisenberg and Family Depression Center and served as its executive director from 2001-21; Founding Chair, National Network of Depression Centers (NNDC); and Research Professor Emeritus in the Michigan Neurosciences Institute. He joined the faculty at the University of Michigan Medical School in 1974 and served as Chair of the University of Michigan’s Department of Psychiatry from 1985 to 2007, when he stepped down to focus on directing the Depression Center and developing the NNDC.

Dr. Greden earned his B.S. and M.D. at the University of Minnesota, completed his internship at Harbor/UCLA, and his psychiatry residency at the University of Minnesota Hospitals and Walter Reed Army Medical Center in Washington, DC. He has authored or co-authored more than 400 articles, refereed hundreds of abstracts, books, book chapters, and presented approximately 350 invited lectures. He has almost three decades of NIH funding as investigator, co-investigator and consultant. Major research themes have focused upon studying biomarkers and developing treatment strategies to prevent recurrences of depression and bipolar disorders. Most recently, he has led national, multi-site efforts to develop pharmacogenomic markers to improve selection of antidepressant medications and improve outcomes.  He has served as mentor for more than a dozen NIH or Veterans Administration “K” awardees and young investigators, and presented 10 keynote addresses for the American Psychiatric Association’s “Psychiatry Young Investigators’ Colloquium.”

To address the globe’s huge health burdens, disabilities and costs associated with clinical depressions, bipolar disorders, and related conditions, Dr. Greden proposed establishment of the country’s inaugural Eisenberg Family Depression Center at the University of Michigan. Approved by the Regents in 2001, a new Depression Center-Ambulatory Psychiatry facility opened in 2006. The Eisenberg Family Depression Center integrates research, clinical, educational and public policy efforts of more than 330 members from 13 University Schools and Colleges and 33 different University departments. Dr. Greden subsequently led efforts to establish similar centers throughout the country and integrate them into a National Network of Depression Centers patterned after the National Cancer Center Network. 16 eminent universities signed an NNDC Charter in a ceremony in Ann Arbor in October, 2008 and the NNDC has now grown to 27. Dr. Greden served as the Chair of the National Network of Depression Centers from its foundation until 2014, and now serves as Founding Chair.

Dr. Greden is past-President of the Society of Biological Psychiatry; the Psychiatric Research Society; the American Association of Chairs of Departments of Psychiatry (AACDP); the Academic Psychiatry Consortium; and the Board of Directors of the American Foundation for Suicide Prevention. He edited the Journal of Psychiatric Research for seven years, chaired the Council on Research for the American Psychiatric Association for five years, served as Council Member of the American College of Neuropsychopharmacology (ACNP), Co-Chair of the National Psychiatry Training Council established by NIMH, and was selected as the 2005 recipient of the Distinguished Alumnus Award of the University of Minnesota Medical School. In  2013 the University of Michigan’s Council for Disability Concerns awarded Dr. Greden the James T. Neubacher Award. The American Psychiatric Association recently conveyed the Mrazek keynote Award to him for leading pharmacogenomic research efforts, and American College of Psychiatrists awarded the Mood Disorders Research Award and plenary speaker award for the 2021 meeting, and the Michigan Governor appointed him to a newly established Suicide Prevention Commission, where he serves on the Executive Committee.