On February 22, members of the Michigan Medicine and Ann Arbor community came together for a common purpose — to help fight addiction and the stigma that comes with it.

The effort was part of the “We Can Be Heroes” event at the Michigan Theater, which included a screening of a documentary film, an art show and panel discussion. And the event’s success wasn’t lost on those in attendance.

“We made 1,000 free tickets available to our community and all of those tickets were claimed,” said Fred Blow, Ph.D., director of the U-M Addiction Center. “That proves that addiction is not only an individual issue, but a community issue, as well.” 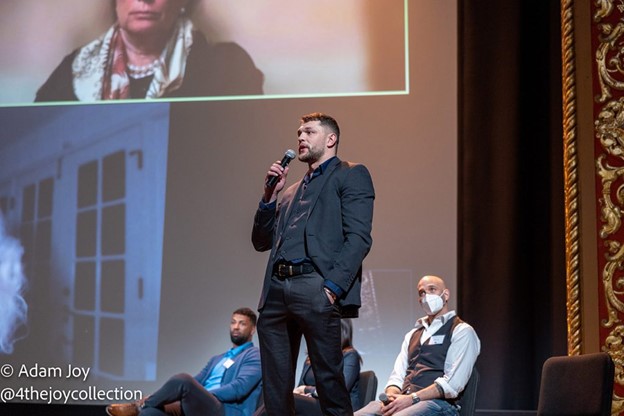 The night started out with an art show in the theater lobby, featuring pieces and music created by those currently in recovery or whose lives have been affected by someone else’s addiction.

“It never ceases to amaze me what people in recovery are capable of if they are only given the chance,” said Mario Nanos, founder and president of Washtenaw Families Against Narcotics (FAN), which helped sponsor the event along with the U-M Addiction Center.

Following remarks from Blow and Nanos, the audience watched “We Can Be Heroes,” a film by Mike Ramsdell that follows Detroit-area boxer Taylor Duerr as he navigates his boxing career while in recovery from heroin and other substance use disorders.

The overall theme of the night was the importance of tackling stigma that comes with addiction.

As Duerr said: “Admitting I was a drug addict was the hardest challenge for me.”

For Duerr and others, that is due to the way those facing addiction are treated by others — often by being shunned or seen as weak and powerless.

“I look at stigma as an extension or form of shame,” said Ilitch, who spoke about a family member’s struggle with addiction. “Scapegoating is put on the shoulders of the person facing addiction … and that keeps the family, as well as the person who is addicted, from really getting help and speaking freely about their feelings.”

Dingell echoed those thoughts: “My father was a drug addict and you were told never to talk about it.”

“Only once I became unafraid to talk about addiction, I helped others understand that it happens in every family, it doesn’t matter your background,” Dingell said.

What you can do

So what are steps you can take to help those facing substance use disorder? According to the panel, the first step is talking about it.

Volkow said it’s vital to understand that addiction isn’t a choice someone is making.

“There are certain changes that happen in the brain that make [addiction] an instinctual need in order to survive,” Volkow said.

Therefore, just like other diseases, the panelists said it’s vital that others do not ignore or isolate those facing challenges.

“People stigmatize things when they don’t understand them,” Volkow said. But by showing that those struggling with addiction are normal friends, colleagues and neighbors, it will help people feel empathy. And, as Volkow said, “that can make a big difference in changing the stigma.”

Ramsdell said it’s as simple as seeing others as peers.

“Let’s stop putting labels on each other — nothing is ever made better by stereotypes,” he said. “We need to get humans to help humans and not look at it as humans helping addicts.”

The panel also said it is imperative to improve treatment for substance use disorder.

“So many health care professionals don’t understand addiction, and like others, see it as a sign of weakness,” said panelist Allison Lin, M.D., M.S., addiction psychiatrist, assistant professor and director of the Addiction Psychiatry Fellowship Program at the U-M Addiction Center. “That makes it so much harder for people to reach out for the help they need.”

“The fact is, stigma is the single biggest barrier for people getting into care,” she continued. “But it’s also the most addressable barrier that we have because every single person can do something about it.”

Part of that work will include more events like the one that took place at the Michigan Theater.

“Our goal is to take what we’re doing here to communities across the state,” Nanos said. “And once we do that, hopefully across the country. The fight against addiction starts in the community — and it starts with us.”

If you need help or treatment for substance use disorders, confidential help is available for you. Please contact SAMHSA’s National Helpline at 1-800-662-HELP (4357) or via text message at 435748 (HELP4U).

Prior to this week’s event, Blow, Nanos and Ramsdell joined The Wrap employee podcast to discuss addiction and its stigma. Click here to watch that important episode that took place prior to the 'We Can Be Heroes' film event. The event was promoted via a NPR Stateside interview and an article and podcast in Crain’s Detroit Business.