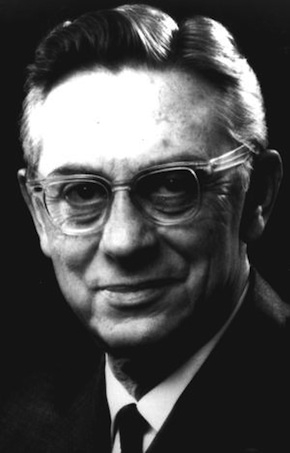 The Jerome W. Conn Alumni Society is named in honor of the first chief of the Metabolism, Endocrinology & Diabetes Division. We are hopeful the Society will keep alumni of MEND engaged in our innovative research and education missions. Through annual events, members will be able to catch up with old friends, meet new peers, and spark intellectual discussions.

The Jerome W. Conn Alumni Society is open to past alums of the division, whether you were a fellow, faculty member, or graduate student. Annual membership dues are $100 and will directly support our Ralph Knopf Fellowship Fund. Our Fellowship Fund provides direct support to our current fellows to cover costs associated with attendance at national and international conferences, books, and supplies. Visit our Endocrinology Fellowship Training Program to learn more about who you will be supporting by becoming a MEND Society member.

Jerome W. Conn, MD (1907-1994), delineator of primary aldosteronism, devoted his entire professional career to the University of Michigan and served as the first Endocrinology & Metabolism Division Chief from 1943-1973.

Dr. Conn was born in New York City on September 24, 1907 and died in Naples, Florida on June 11, 1994. A graduate of Rutgers University (1928), Dr. Conn received his MD from the University of Michigan Medical School in 1932 was associated with the University for the duration of his career. He received the title of Professor of Internal Medicine in 1950.

Dr. Conn’s greatest contribution to medicine was the description in 1954 of the new entity called primary aldosteronism (later named the Conn Syndrome). Caused by an adrenal tumor secreting excessive amounts of the adrenal hormone aldosterone, this disorder is one of the few serious hypertensive diseases that can be cured completely by the surgical removal of the adrenal tumor, if it is recognized early enough.

Dr. Conn subsequently devised new diagnostic techniques for the early detection of this adrenal tumor. Between 1955 and 1975, the University of Michigan Hospital was a worldwide center for study and treatment of patients with primary aldosteronism and related conditions.

Dr. Conn also pioneered studies exploring the physiology of the pituitary-adrenal system, the mechanism of acclimatization to heat, and the physiology and pathophysiology of the renin-angiotensin-aldosterone systems in humans. He contributed significantly to the knowledge of many aspects of diabetes and spontaneous hypoglycemia.

He received numerous honors, including the Banting Medal of the American Diabetes Association, the John Phillips Memorial Award and Mastership of the American College of Physicians, Honorary Fellowship in the American College of Surgeons, an honorary Doctor of Science Degree from Rutgers University, an honorary Doctor of Medicine Degree from the University of Turin, Italy, the Claude Bernard Medal from the Institute of Experimental Medicine and Surgery at the University of Montreal, the International Prize of the Gairdner Foundation in Toronto, Canada, and the International Stouffer Prize and Gold Medal for Research in Hypertension.

In 2012, the Regents of the University of Michigan established the Jerome W. Conn Collegiate Professorship in his honor.

How to Pay Your Annual Dues (for existing members)

How to Become a Member

You will need to complete our online membership form. After you complete the form and click submit, you will receive a confirmation email which will include a link to pay the $100 annual dues online which will directly support our Ralph Knopf Endowed Fellowship Fund. The fund will be utilized to specifically advance the educational efforts of our current MEND fellows including travel to conferences and presentations, an annual fellows lecture chosen by the current fellows, and books and software. Ultimately, the fund may allow us to support additional fellowship positions or help defray tuition debt for selected fellows.

Thank you for your support.