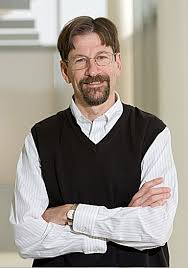 Welcome. The central focus of this laboratory is to examine molecular mechanisms involved in the folding, trafficking, and targeting of newly-synthesized endocrine secretory proteins.

1a). We are investigating proinsulin folding in the endoplasmic reticulum (ER). Recent evidence strongly implicates proinsulin misfolding in various genetic forms of diabetes mellitus, and possible in the most common form of diabetes known as "type 2" diabetes. We have identified misfolded isoforms of proinsulin by virtue of mispaired disulfide bonds, and examined interactions of these misfolded forms with ER molecular chaperones.

1b). We are investigating autosomal dominant diabetes caused by mutations in the coding sequence of preproinsulin. Evidence since 2007 shows such mutations to be the second most common cause of congenital neonatal diabetes. We have been characterizing misfolding of these mutants as well as exploring molecular mechanisms for how the mutant proinsulins may impair production of insulin derived from the nonmutant preproinsulin allele. As a model, we are examining Akita mice which exhibit similar autosomal dominant neonatal diabetes caused by a mutation in the preproinsulin coding sequence from just one of the four alleles of mouse insulin.

1c). We have developed a new fluorescent proinsulin called hProCpepGFP, and a transgenic mouse line expressing this fluorescent proinsulin exclusively in pancreatic beta cells. The hProCpepGFP allows for production in the mice of authentic human insulin as well as stoichiometric quantities of CpepGFP, which can be followed by fluorescence microscopy in live mice as a quantifiable measure of
pancreatic insulin content.

1d). We are concentrating on ways to modulate the ER environment to impact on proinsulin folding, including small molecules that may be of benefit to insulin production, as well as manipulation of ER oxidoreductase activity.

1e). We continue our long track-record of interest in insulin secretory granule biogenesis and dynamics, including studies of various protein traffic regulators, as well as the pancreatic beta cell-specific zinc transporter.

2a). We have been concentrating on humans and mice with congenital hypothyroidism caused by an Endoplasmic Reticulum Storage Disease as a consequence of expression of misfolded mutant thyroglobulin (Tg). Many human families have been described with the disease, and the thyroglobulin mutations in these families are known. We cloned the mutation causing congenital goiter in cog/cog mice, and this involves a single amino acid change contained within the cholinesterase-like (ChEL) domain of Tg. This same domain is also involved in cases of human hypothyroidism. In the case of the mice, the result is surprising since Tg is comprised of 2746 amino acids and the single point mutation does not appear until residue 2263 -- yet we have generated positive proof that there is misfolding within the first 1450 amino acid stretch of polypeptide (that does not contain the mutation). A story is developing in which the carboxyl-terminal ChEL domain functions as an intramolecular chaperone for the upstream part of the Tg protein. Deletion of the ChEL domain leaves the truncated amino-terminal Tg unable to be transported from the ER, but expression of the ChEL domain as a separate secretory protein rescues the truncated Tg.

2b). Congenital hypothyroidism in the rat dwarf (rdw) is also caused by a single point mutation in the ChEL domain. However, the dwarf rat develops an unusually hypoplastic (small) thyroid gland despite an increased in the blood levels of the growth promoting hormone known as "thyroid stimulating hormone" (TSH). We are concentrating on the hypothesis that, as a consequence of expression of the mutant Tg protein, thyroid cell death is the cause of the hypoplastic thyroid gland. Studies indicate that the mutant rdw Tg protein is very difficult to completely degrade. The degradation process known as ERAD, is under active investigation for mutant Tg.

2c). Transgenic mice have been created in which the rdw mutation has been cloned into mouse Tg, expressed exclusively in thyroid cells. The transgenic animals have hypothyroidism and a small thyroid, allowing for new investigation into the underlying cellular mechanisms of thyroid disease in ways that cannot be studied in humans.

2d). Tg is a homodimeric protein. New studies show that ChEL itself is a homodimer, just like its homologs, acetylcholinesterase and neuroligins. Dimerization of Tg is essential for Tg secretion and thyroid hormone synthesis. A four-helix bundle mechanism for Tg dimerization is proposed and mutants that may perturb or augment dimerization have been identified.

2e). We have been interested in polarized protein trafficking, i.e., selective delivery to the apical or basolateral plasma membrane domains, of thyroid exportable proteins. Tg and certain key thyroid enzymes are nearly exclusively distributed to the apical cell surface. Mechanisms of apical protein delivery have been a longstanding goal of this project.