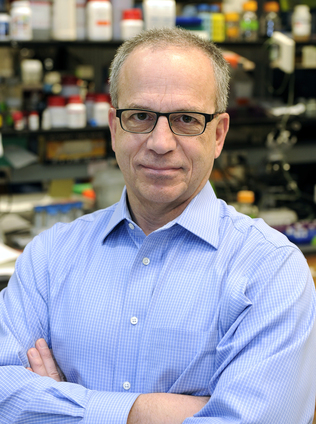 Dr. LiPuma’s research laboratory focuses on  bacterial infections of the airways in persons with cystic fibrosis (CF). His laboratory has developed novel methods of bacterial genotyping to study the molecular epidemiology of CF related respiratory tract pathogens, as well as numerous genetic-based methods for bacterial species identification. His interest in bacterial taxonomy has contributed to the description of a couple dozen novel bacterial species. His work focusing on bacterial pathogenesis has utilized cell culture and animal models of infection. Recent research employs culture-independent microbial community profiling, including the use of next generation DNA sequencing, to understand the airway microbiota in CF. His laboratory serves as a national reference laboratory for the Cystic Fibrosis Foundation, and maintains an extensive culture collection that includes approximately 40,000 bacterial strains.

Disease caused by the bacteria Streptococcus pneumoniae (pneumococcus) varies from relatively benign middle ear infections and sinusitis to life threatening meningitis and pneumonia. Pneumococcal infections, which primarily affect children under two and adults over 65 years of age, kill approximately 1 million children each year world wide, with the greatest impact in the developing world. Despite the severity of some infections with pneumococcus, the majority of young children carry the organism in their noses asymptomatically. Since the introduction of the seven-valent pneumococcal vaccine in the United States eight years ago, the incidence of severe pneumococcal disease has dropped dramatically. This vaccine targets the seven “types” (out of over 90 types known) most often associated with invasive disease in the United States. Despite the dramatic decline in infections as a result of vaccination, new, previously rare types have begun to replace the targeted organisms. More worrisome is that some of these replacement types are resistant to many of the antibiotics routinely used for treatment.

We do not understand what factors allow one type of pneumococcus to out-compete another type. My laboratory is interested in determining what allows this bacterial pathogen to survive and compete in the human nose. Because nasal colonization is the first step in pneumococcal disease, understanding what factors are required for success in this environment will allow us to better predict the outcome of vaccination. In addition, we hope to use the strategies that have been refined by bacterial competitors over millions of years to discover new approaches.

Research Program:
The Haemophilus influenzae Research Laboratory, funded by the National Institutes of Health, studies the interactions between bacteria and humans during H. influenzae colonization and infection. The goal of these studies is to identify strategies to prevent sinusitis, otitis media, and bronchitis caused by H. influenzae.

Collaborators:
The Center for Molecular and Clinical Epidemiology of Infectious Diseases is a multi-discipline center promoting laboratory and field studies related to infectious diseases.

Clinical research in hospital epidemiology and bacterial resistance as it relates to nosocomial infections and antimicrobial stewardship.

My laboratory investigates the basic science microbiology and pathogenesis of diseases in children and adolescents caused by bacteria. Our current research focus is with group A streptococcus, or Streptococcus pyogenes, a bacterial pathogen capable of causing a wide diversity of superficial and invasive human infections, ranging from the relatively common pharyngitis, or “strep throat,” to the less common and more severe necrotizing fasciitis, or “flesh eating disease”. In addition, group A streptococcal infections have been linked to a number of immune-mediated conditions occurring after an acute infection, including arthritis, kidney damage, and rheumatic heart disease, among others. Rheumatic heart disease caused by group A streptococcus is the most common cause of acquired heart disease in the world and is a major contributor to mortality, particularly in the developing world.

A safe and effective vaccine against group A streptococcus has yet to be developed, partly due to an incomplete understanding of the interaction with the bacterium and the host immune system occurring at sites of infection. Our research seeks to determine how the streptococcal bacteria interacts with the host innate and adaptive immune mechanisms at sites of mucosal infection. One current project examines the role of host Th17-dependent immunity in promoting clearance of group A streptococcus from the site of infection.

Other active projects are examining the roles of streptococcal toxins and regulatory mechanisms in promoting survival and long-term carriage of the bacterium. Findings from our research may ultimately identify novel mechanisms to produce protective immunity against group A streptococcus and could eventually help in developing a candidate vaccine.

The human adenoviruses cause a wide range of clinical disease, ranging from mild upper respiratory tract infections in otherwise normal individuals to overwhelming disseminated infection and death in immunocompromised patients.  Persistent adenovirus infections have been linked to chronic lung diseases such as asthma and chronic obstructive pulmonary disease.  Much of our laboratory’s research is focused on adenovirus pathogenesis, defining interactions between adenoviruses and host inflammatory responses.  We use a mouse adenovirus to study issues of viral persistence, host immune responses to infection, and interactions between the two processes.  We are interested in the ability of a persistent adenovirus to modulate host immunologic and physiologic responses induced by subsequent stimuli.  In addition, we hope to define ways in which aberrant host inflammatory responses, such as exaggerated T-helper type 2 cytokine production in asthma or eicosanoid overproduction in bone marrow transplantation, may influence viral replication and alter host susceptibility to viral infection.