The University Hospital has continued to advance cardiovascular medicine and education since its inception. It is responsible for foundational contributions to: 1) the 12-lead electrocardiogram system we use today through Dr Frank Wilson’s landmark work; 2) human genetics with the first dedicated department in the United States; and 3) reperfusion treatment of ST-elevation myocardial infarction. 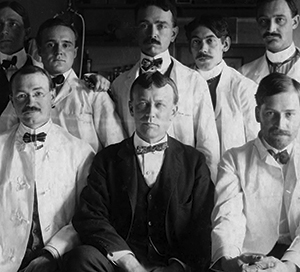 George Dock (dark suit) with members of Class of 1901

George Dock publishes Some Notes on the Coronary Arteries, in which he diagnoses a heart attack in a living patient and describes its pathophysiology. 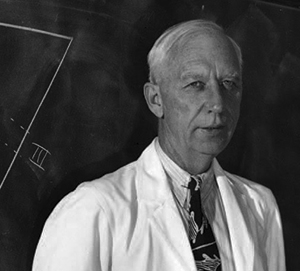 Frank Norman Wilson begins a 32-year career at U-M, where he will become a world leader in electrocardiography. By focusing on the tracings’ form, rather than rhythm, he will be the first to properly of identify ECG patterns in bundle-branch block. While seeking a mechanism for acquiring unipolar, semidirect recordings, in 1934 he will develop the central terminal, which will give rise to the six precordial leads and form the basis of the modern ECG machine. He will establish conventions for depicting polarity and placing leads. And his analysis of the QRS complex will explain how heart attacks produce Q waves and how their patterns can reveal distribution of injury.

Stevo Julius conducts seminal research on prehypertension, showing an increase of sympathetic tone in this very early stage of hypertension and that chemical blockade of autonomic nerves normalizes blood pressure in some patients. He will use the population-based Tecumseh Study to demonstrate the association of prehypertension with cardiac and vascular damage, and the multicenter TROPHY trial to show that early treatment can postpone, but not prevent, later hypertension. 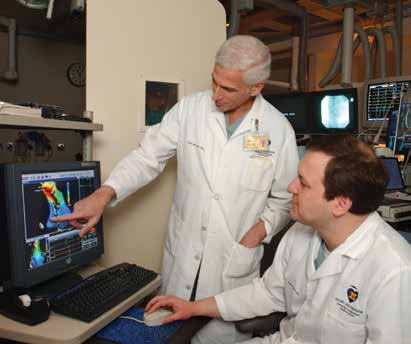 Fred Morady, who previously performed the first cardiac ablation in man, arrives at U-M and quickly establishes it as an internationally recognized electrophysiology research center. Morady and Hakan Oral will optimize the ablation technique, develop new catheters, and demonstrate that atrial fibrillation can be generated not only in the atrium itself but by tissue extending along the pulmonary veins.

William O’Neill and Eric Topol conduct seminal studies demonstrating the value of angioplasty and the clot-busting drug tissue plasminogen activator (rt-PA), respectively, for heart attacks. O’Neill will establish UMHS’ emergency angioplasty program and a regional network of referring hospitals. Topol will lead national and international randomized trials, such as the Thrombolysis and Angioplasty in Myocardial Infarction trial, to determine how best to treat patients with rt-PA. Their work makes U-M a focal point for heart attack research, and their insights will shape international coronary thrombosis care.

Elizabeth Nabel and Gary Nabel (Rheumatology) demonstrate the ability to transfer and express genes within endothelial cells of the arterial wall in an animal model, highlighting the technique’s potential in cardiovascular disease. They will also show that fibroblast growth factor-1 can stimulate new blood vessel growth and may have potential for improving blood flow in selected clinical settings. After U-M, Elizabeth will direct the National Heart, Lung and Blood Institute and Gary, vaccine research at the National Institute of Allergy and Infectious Diseases. 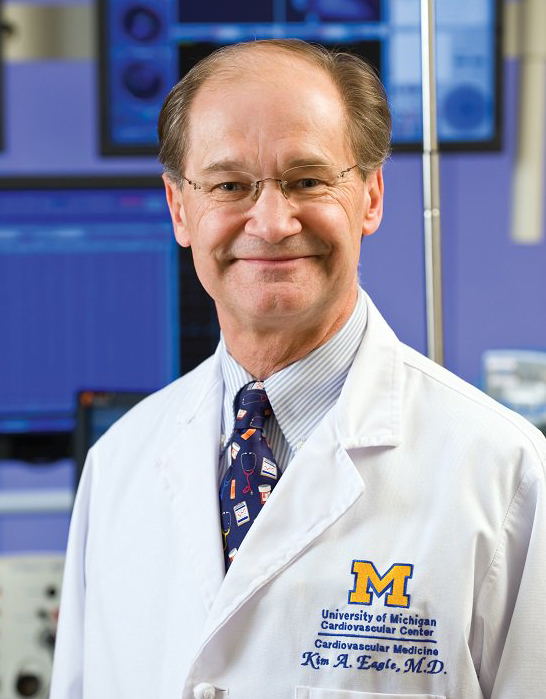 Kim Eagle and colleagues form the International Registry of Acute Aortic Dissections, which will go on to enroll more than 6,500 patients from 42 aortic centers in 13 countries. Through nearly 100 publications, Eagle and fellow IRAD investigators will rewrite our understanding of how this highly lethal condition presents and is managed, and will elucidate multiple opportunities to improve care. For example, IRAD will show that urgent surgery, even in very high-risk patients who would previously have been denied an operation, can be life-saving, both immediately and in the long term.

As Principal Investigator of the RALES trial, Bertram Pitt improves survival in patients with heart failure by showing that adding a mineralocorticoid receptor antagonist to standard therapy reduces mortality and hospitalization in patients with chronic severe heart failure. He will contribute additional insights through the later EPHESUS trial.

Vallerie McLaughlin becomes the Principal Investigator for the Data Coordinating Center of the Pulmonary Hypertension Breakthrough Initiative. Under McLaughlin, U-M maintains the clinical data for a consortium of 13 institutions biobanking lung and blood samples from pulmonary hypertension patients undergoing transplant. The goal is to use pathology, proteomics and genomics to understand and treat this devastating, progressive disease. In 2015, McLaughlin will co-publish findings from a phase 3 clinical trial showing positive results from the first prostacyclin receptor agonist for the treatment of pulmonary arterial hypertension.