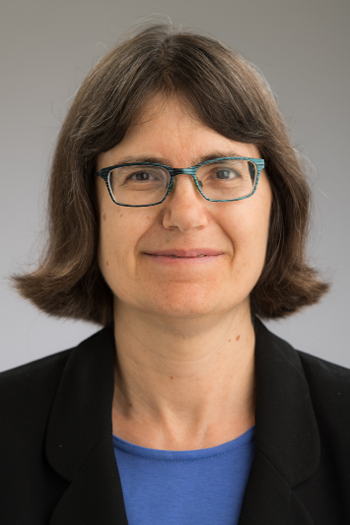 Ms. Uhlmann earned her BA in Biology at Oberlin College in 1983, and received her Master’s Degree in Human Genetics, with a specialization in genetic counseling, from the University of Michigan in 1987. After working 5 years in the prenatal genetics clinic at Wayne State University School of Medicine, she returned to U-M in 1993. Since then she has served as the clinic coordinator and a genetic counselor for the Michigan Medicine Medical Genetics Clinic. She has also been an executive faculty member of the Genetic Counseling Program since 1997.

Ms. Uhlmann has an international reputation in genetic counseling and is a respected leader in the genetics community. She entered the field of genetic counseling 7 years after the National Society of Genetic Counselors (NSGC) was established and served as President (1999-2000). Read her address "1999 Presidential Address to the National Society of Genetic Counselors". She has served on the Board of Directors of the NSGC, the Genetic Alliance, the Editorial Board of the Journal of Genetic Counseling, and as an appointed member on several national and state committees and task forces. She has received three leadership awards along the way from the NSGC in recognition of “outstanding achievement and leadership”: Regional Leadership Award (1996), Outstanding Volunteer Award (2009), and the Natalie Weissberger Paul National (Lifetime) Achievement Award (2011). Read her address "The Power of Connecting".

Ms. Uhlmann is a co-editor and chapter author of both the 1998 and 2009 editions of A Guide to Genetic Counseling the first book devoted to the principles and practice of genetic counseling. This book is regarded as the “gold standard” in the field and is used internationally in genetic counseling graduate programs. She has also contributed chapters on genetic counseling to other textbooks and co-authored more than 50 peer-reviewed articles.

How passionate is Wendy about genetics? She says to this day, almost every year since 1988, she makes a "chromosome cake", which is a chocolate cake, covered with fudge frosting and maize and blue chromosomes, for the genetic counseling program graduation party. One graduating class gave her a mug with the words “Eat. Sleep. Genetics.” There is also the 25th wedding anniversary trip to Barcelona she took with her husband where she remembered to download the genetics articles she wanted to read, but forgot to download the directions to where they were staying.

When did you decide you wanted to be a genetic counselor?

My first introduction to genetic counseling was Professor Richard Levin’s genetics class at Oberlin College during my sophomore year. After taking this class, I knew that I wanted to study more genetics. In addition to coursework, I spent January of my senior year at the University of Michigan doing a Winter Term project on genetic counseling with Dr. Thomas Gelehrter (Oberlin Class of 1957) and at the time, Chief, Division of Genetic Medicine, Department of Internal Medicine. I spent the month shadowing Dr. Gelehrter, Diane Baker, MS, CGC (genetic counselor) and other clinicians, reading articles about genetic counseling, attending the medical students’ genetics course, and observing in the Cytogenetics Laboratory. This Winter Term project was instrumental in my decision to become a genetic counselor. I started my career in genetics in 1984 as a cytogenetics technologist at the University of Michigan, Division of Pediatric Genetics, performing chromosome analysis of amniotic fluid and solid tissue samples. Although I enjoyed my work there, it was not enough for me to be involved only in the laboratory end of the clinical picture. I wanted to know how the results from the chromosome study would be put to use and how it would impact patients and their families.

What do you do at the Medical Genetics Clinic?

The Medical Genetics Clinic, established in 1941, is the oldest and one of the few adult genetics clinics in the country. In my leadership role, I oversee our clinic’s operations and trainees’ rotations. In my clinical genetic counselor role, I provide genetic counseling and coordinate genetic testing for adults with a personal and/or family history of a genetic condition, particularly predictive genetic testing for neurogenetic conditions (e.g. Huntington disease). There has been tremendous growth in the number of patients seen, genetic tests ordered, and complexity of indications. In 2016, patients were seen for 165 different indications with 110 seen just once. As a result of this diversity of indications and complexity, case prep is extensive and time intensive. With advances in genetic testing and more genetic tests being ordered, time is spent researching and selecting genetic tests for patients, dealing with insurance coverage issues, searching databases and the literature for information about identified variants, and communicating results.

What does your research focus on?

My research is focused on genetic counseling and risk communication, genetic testing, and related ethical issues. Since 2007, I have been a member of J. Scott Robert, PhD’s HBHE Genetics Research Group, School of Public Health. As a research team member, I have served as a Co-Investigator on NIH-funded R01 studies including:

In addition, I have served as a consultant and work group member of other NIH-NHGRI funded studies and on research committees for over 25 genetic counseling students’ studies.

What are some career highlights?

I have had many that I am proud of; below are just a few: